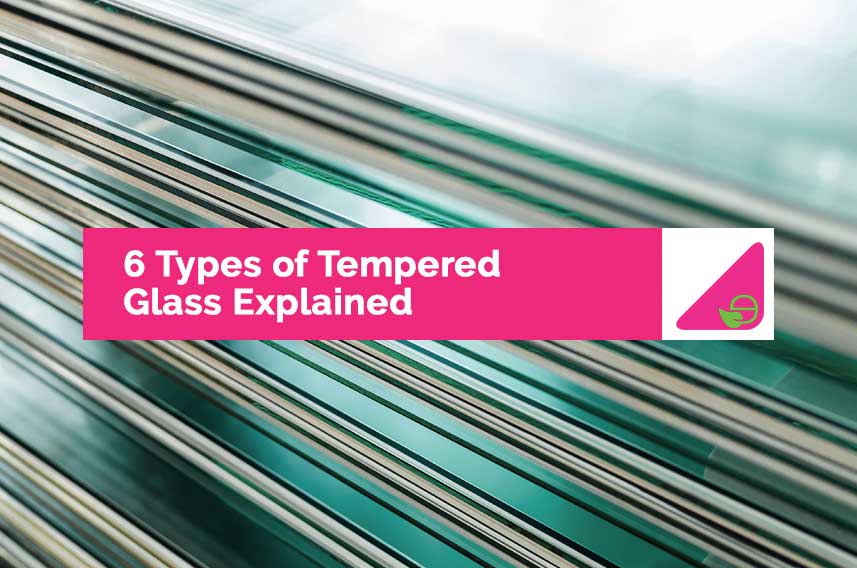 Glass is used for a wide range of applications, from household products, to uses in commercial and residential structures, to vehicles.

There are different types of tempered glass, which vary in the ways in which they are manufactured, as well as in their ultimate strengths.

What is Tempered Glass?

Tempered or toughened glass is a popular type of glass.

It is manufactured in a way that it is strengthened, and as a result it is considered as a type of safety glass.

Tempered glass is used in a wide variety of applications, such as to produce shower doors, refrigerator trays, aquariums, cookware and passenger vehicle windows, among many others.

Tempered glass is around four times as strong than annealed glass.

The inner layer of such glass has a greater contraction, and as a result it induces compressive stresses in its surface which is balanced off by the tensile stresses in the rest of the glass.

Due to this increased surface stress, should it break it will do so into small rounded chunks, not in sharp jagged shards as other types of glass would.

The strength of tempered glass derives from the compressive surface stresses.

Should the glass need to be cut, this needs to be done prior to the tempering.

Otherwise cutting or grinding will result in the glass to fracture.

Tempered glass is not only stronger, but it also has good thermal resistance properties.

It is thus considered to be safer than other kinds of glass and often used in office fit outs for glass partitions.

How is Tempered Glass Made?

Tempered glass is made from annealed glass by means of a thermal tempering process.

The glass is laid onto a roller table, and passed through a furnace.

The heat that is applied is well above its transition temperature, generally amounting to around 620 degrees.

Following this thermal application, the glass is quickly cooled by means of forced air drafts.

The inner part remains free to flow for a short period of time.

Another way to make tempered glass is by using the chemical toughening process.

During this process a surface layer of glass which is at least 0.1mm thick is forced into compression by ion exchange.

This means that the sodium ions in the glass surface are exchanged for potassium ions, which are around 30% larger.

This is carried out by means of an immersion process, whereby the glass is immersed into a bath of molten potassium nitrate.

This chemical toughening process increases the glass’s toughness more than thermal tempering, and it is thus used for glass objects that have rather complex shapes.

Where is Tempered Glass Used?

Tempered glass is the best option whenever the particular application requires considerable strength and/or thermal resistance.

It is also the best choice in terms of safety considerations.

As a result, tempered glass is used for passenger vehicles, since it can withstand temperature changes, small impacts from road debris, and road accidents.

Should it break, there will be less danger for the passengers as it won’t break up into sharp shards.

It is also used to make sliding doors, elevators, displays and for smaller uses such as to make computer casings, touchscreen devices and mobile phone protectors.

Ceramic glass is used for applications where temperatures change quite quickly, such as on cooktops and fireplaces.

It is also resistant to high temperatures.

The properties of ceramic glass are similar to those of both ceramic and glass.

The base glass undergoes a controlled crystallisation process to incorporate polycrystalline materials.

Annealed glass is a basic glass product which is formed from the annealing phase of the float process.

It is used to form other more advanced types of glass.

Molten glass is allowed to cool slowly, until it reaches room temperature.

This is a controlled process which enables the glass to relieve any internal stresses.

If this controlled slow cooling process is not carried out, the glass would end up cracking even with a relatively minor change in the temperature.

Heat strengthened glass is made by means of a process which involves heating up annealed glass to around 650 to 700 degrees celsius.

Then it is cooled quickly, but not as quickly as with toughened glass.

In fact this type of glass is considered to be semi tempered, or semi toughened glass.

This heat strengthening process however increases the mechanical as well as the thermal strength of the glass considerably, and as a result it is twice as tough as annealed glass.

Should this type of glass break, the fragments would be similar in size as those of annealed glass, but they would have a higher likelihood of remaining together.

This is a commonly used type of glass, and the most popular choice for structural applications such as balustrades.

Annealed glass is heated up at a temperature of around 700 degrees celsius.

Following this heating up, the cooling process commences.

This is accelerated by applying a uniform and simultaneous blast of air on both of its surfaces.

As a result of the different cooling rates taking place between the surface area and the inside part of the glass, different physical properties are produced, which in turn lead to compressive stresses in the surface.

These are balanced out by the tensile stresses within the body of the glass.

This method makes the glass up to four or five times stronger and safer than untreated glass.

As a result tempered glass has improved mechanical resistance to breakages.

Should it break, the pieces will typically be small, regular fragments instead of long and sharp shards.

Any one of the types of glass described above can be laminated.

The two sheets of toughened glass are generally laminated together by using a 1.52mm thick PVB interlayer, or an SGP interlayer.

The latter is even more rigid and strong.

There are also other types of interlayers, including coloured ones which can be used for decorative purposes or to increase privacy.

Some interlayers are also ideal for their sound dampening and fire resistance properties.

First of all, it is very safe and secure.

Instead of shattering upon impact, laminated glass will manage to hold together thanks to the interlayer.

So shattered glass fragments can be avoided, and naturally it is much safer.

Moreover, should a glass panel break or shatter, it is very unlikely that both the laminated panels would end up breaking at the same time.

So the remaining panel and the interlayer will often be able to support the broken glass part and keep it in place until it is properly secured or replaced, as required.

Ballistic glass has a high bullet resistance and is thus ideal to offer resistance against ballistic threats.

It is used for windows and glass doors as well as protective glass for vehicles, among others.

Despite its resistance such glass is not that thick and it possesses very good thermal insulation properties too.

Unlike ordinary glass, ballistic glass manages to reduce the speed of bullets in a gradual manner, as it absorbs its energy.

However it is not completely impenetrable.

One of the main disadvantages of tempered glass is that it has to be cut to size or pressed into the required shape before tempering.

Otherwise, once it has been tempered it cannot be re-worked.

In fact, even procedures such as polishing the glass’s edges or drilling holes within it, have to be carried out before the tempering process is done.

Due to the balanced stresses within the glass, should it have any damage on any part of it, the result is that the glass will end up shattering into thumbnail sized pieces eventually.

This is even more probable if the damage is at its edge as in this part the tensile stress will be at its highest point.

While tempered glass is considered to be safe, there may be situations where, as a result of a very hard impact, the glass will end up shattering completely.

Another drawback is that the surface of tempered glass generally exhibits surface waves which are caused by the contact that is made with the flattening rollers.

For some uses, such as film solar cells, this is a problem.

While you may have thought that all types of glass were similar, now you should have a better idea of the different types of glass that exist, along with their respective pros and cons.

The various kinds of tempered glass are definitely better than untreated glass as they are stronger and safer.

If you have a requirement for tempered glass installation, contact us today for a quotation.